You can create your own chat commands with ElBierro. 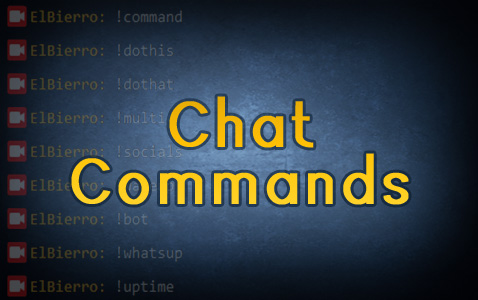 What are simple commands?

With a simple command you just define the command to enter in chat and the bots response to it. Its simple as that! :-)

You can also create a simple command using Bierro Talk. You can read here how Bierro Talk is working.

What are command aliases?

When you have a command like !donation, you sometimes want it also to be reachable with other commands like !donate. With creating an alias you do not need to create copies of one command and also edit each of them when changes are required.

Which settings are available?

Support the bot by enabling !elbierro and/or !bot

You would help me alot to enable the !elbierro and/or !bot command(s) in your channel. These commands will display a short info about the bot and link to its website. You're helping me in getting more audience to the bot and possibly finding more supporters.

What are special commands?

Special commands are offering special functionality which you can assign to a command for your channel.

See below to read what each available special command does.

With that command you can count up Bierro Talk Channel Variables.

Examples, you could set up !deaths as your command, for example to count your deaths in a game. You use then the Channel Variable deaths. If you want, ElBierro also can message chat after raising the value. For that, just define a response. You can use Bierro Talk in that response. Example: "I died [[deaths]] times!"

Moderators and the Broadcaster also can use these commands to modify any Channel Variable there is:

This special command queries the Tarkov-Market database for the flea market price of the given item. It also works with the international names for most items.

This command can be used to generate multi stream links. If you're joining other streamers on a collab stream, you can tell this command which streamers are participating. When a user enters the command, ElBierro will display a multistream link with all these streamers.

In these examples i assume that !multi was set as the command for this.

When you end stream, the multistream link will be reset automatically. ElBierro generates multistre.am links at the moment - in the future it will have its own multistrema player.

Uptime displays the length of your current stream. If you are offline, it displays when your last stream ended.

This is not available, yet, but will be asap.

On your chat commands settings you are able to enable the !ebc command. This command enables you to add, edit and delete chat commands. Commands created this way are created with default settings. For permissions and cooldown fine-tuning please edit the command on the website.

Why !ebc?
Lots of streamers use multiple bots which use !cmd or !commands to manage chat commands. To avoid conflicts, for ElBierro its !ebc (short for ElBierro Commands).

You can send these commands for your own channel also via Twitch whisper to ElBierro.
You also can enable !ebc to be used by your channel moderators, but they can not use the commands via whisper.

Can I control commands also via whisper?

All of your commands can also be used via whisper to the bot by you. The bot will still respond in your streams chat.

Whats planned in the future for commands?

This chat commands module is made very simple, just to be able to create simple commands. In a second edition it will be more a "If-this-then-that"-thing. You can define events (Follows, Subscriptions, Donations, Cheers, Channel reward redemptions, Chat commands and other things) which will trigger actions (Like text in chat, adding/deducting points, showing an alert with sound and/or images and other things).